Marriage is one of the most important events in an individual's life as it is considered as the promise to a life long bonding of love, responsibility and happiness. Marriage is also considered as an important samskar among the 16 samskars known in the Hindu tradition. Called as Shaadi in Hindi, Madudhuva in Kannada, Pelli in Telugu, Tirumanam in Tamil, Vivaham in Malayalam, an Indian style marriage consists of several traditions and practices. Let understand in detail.

What is Marriage all about?

What happens at a Hindu Wedding Ceremony?

What are the 7 vows of Marriage?

We have created a small video answering all of these common questions around Marriage. Please check this out.

What is Marriage all about?

Marriage means the sacred union of two individuals and a life long commitment of one wife and one husband.

Types of Marriage: The following are the various types of marriages as per the scripture, Manusmrti during the Vedic times

Brahma Vivaah - Where the boy and the girl belong to good families and are of the same varna, which is of same order, color, class as per the society.

Prajapatya Vivaah - Where the bride's father gives away his daughter as a gift to the groom's father.

Daiva Vivaah - Where wealth people help in the marriage of a girl belonging to a poor family. This practice is observed as an act of charity.

Arsha Vivaah - Where the groom pays the price of his bride to the bride's family. This is also called as Kanyashulkam.

Asura Vivaah - Where the groom is of no match to the bride but still marries the bride by paying as much wealth as possible to the bride's family. As an ancient practice people used to give away cows as they are considered as wealth.

Gandharva Vivaah - Where the boy and the girl marry each other without the consent of their families.

Rakshasa Vivaah - Where the boy and the girl love each other but the girl's family is against their marriage. In this case, the boy abduct's the girl and they get married with the consent of the girl.

Paishacha Vivaah - Where the bride is intoxicated due to which she is unconscious while getting married. The bride in this case was married unwillingly. This practice was banned in Manusmrti.

What happens at a Hindu Wedding Ceremony?

The following are the major rituals during a Hindu Wedding

Vaakdaanam - Where the boy sends two elders from his side to the girl's father requesting her hand in marriage.

Kanyaadaanam - Where the girl's father welcomes the boy and gives away his daughter to the boy.

Mangalasnaanam - Where the girl gets ready and is arrived at the agni kund.

Managaladhaaranam - Where the boy ties Managalasutra to the girl's neck.

Saptapadi - Where the boy holds the girl's right hand and takes seven steps around the Agni god.

Grihapravesam - Where the girl enters the boy's house by knocking down a cup filled with rice with her right leg.

Praavisya Homam - Where both the boy and the girl perform homam, a fire ritual to Agni god to perform the duties of grihasthas for the next 100 years. 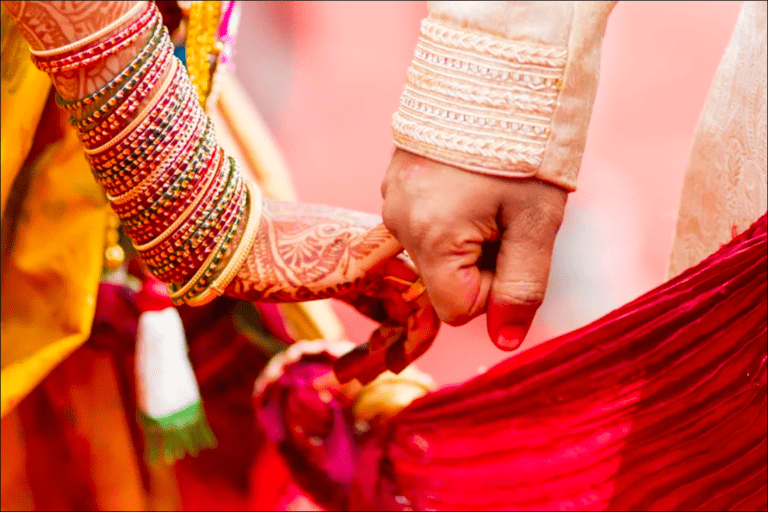 What are the 7 vows of Marriage?

The following are the 7 vows of Marriage

How long is a Hindu Wedding Ceremony?

The Marriage ritual is performed for about 1 to 2 days and may vary based on the cultures and traditions.

What to wear to a Hindu Wedding?

Women prefer sarees or chudidhaars whereas the men prefer dhotis or kurthas.

Book Marriage Puja with us on namastegod.com. We offer the complete puja service which includes panditji along with Samagri and if in-case Samagri is already arranged we also provide the flexibility to book a panditji for puja. We have experienced pandits with more than 20+ years in doing puja. Choose panditji based on your language requirement. Try now!